The bicentenary of the Brazilian Independence and the centenary of Modern Art Week to be celebrated in the year 2022 create an opportunity to reflect and re-dimension the history of Brazilian formation – about its State and Society, as well as its historical culture. The project 3 times 22 will not only be the celebration of two canonical dates, but also an attempt to intertwine three temporalities: Independence (1822), Modernism (1922) and the history of our present time (2022). The two ephemeris provoke a reflection not only on the constitution of the Nation on the political plane, but also on the definition of the imagined community or identities of belonging.
Independence, as an event, is conjugated with the broader process of formation of the national State, materialized by political, economic and cultural sovereignty, from the internal point of view, through the search for a common repertoire, as well as in the perspective of an affirmation of the national singularity before the other nations. As we know, in the Brazilian case, political emancipation did not coincide with the affirmation of nationality. As Brazilian historian Sergio Buarque de Holanda warned, the nation preceded nationalism, not constituting a natural unfolding of the latter: the construction of heroes, symbols and even the narrative of a national history itself took place throughout the nineteenth and twentieth centuries. In a certain perspective, modernism was intertwined with the cultural dilemmas aroused by the colonial rupture.

The modernist generation took on the task of reflecting on this decisive moment, breaking with the aesthetic tradition bequeathed of romanticism, and producing an influential, lasting and new interpretation of the history of Brazil. However, like every narrative about the past, the "rewriting of history" established a new pantheon through the selection of characters, events and concepts that, if on the one hand, illuminated a particular version of the History of Brazil: on the other, obscured narratives and characters. The intertwining of the historical narratives of 1822 and 1922 also presupposes confronting the dialectic between memory and forgetting so that it is possible to reveal obliterated characters, events and processes. Thus, 3 times 22 will try to indicate new horizons of evidencing interpretations and authors who, for various reasons, have become renegades. Understanding the formation of the canons and pantheons in their full historicity and temporality will be one of the challenges proposed by the program.

The project 3 times 22, in this sense, intends to promote the confrontation of three 22s: Independence, the Week of Modern Art and the one that our generation will experience. Critical reflections mediated by the challenges of the present will contemplate the legacy left by the narratives about the modernist movement, thus revisiting the accumulated cultural patrimony, bringing light to the shadow zones of "renegade times". BBM has a valuable collection to explore bibliographical and documentary research areas, and reviewing these two dates from the challenges of the present time will be our main goal. Thus, the 3 times 22 project draws on the rich material preserved by the Brasiliana Guita and José Mindlin Library to find in the documents, books and authors forgotten and renegade by the dominant strands of our historiography. Thus, new evidence, perspectives and interpretations may contribute to the analysis of our history, projecting issues that may guide the construction of a horizon of autonomy, at least in the fields of culture and science.

On the BBM website, it is possible to find bulletins with articles and interviews that explore central themes extracted from the confrontation of the three temporalities; didactic kits that offer material to discuss themes that are not present in the high school and elementary school curricula; publications resulting from research and events carried out by BBM; and also videos and the history of events held over the past few years. 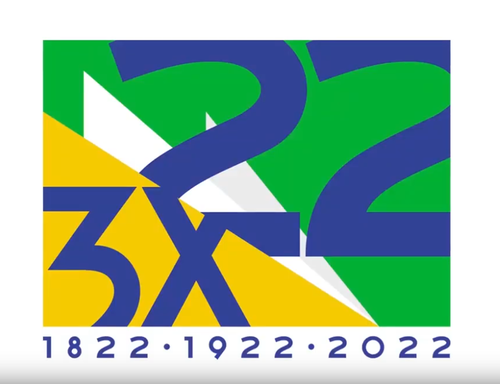