Opened to the public in 2013, the Guita and José Mindlin Brasiliana Library (Biblioteca Brasiliana Guita e José Mindlin, BBM) is an organ of the Provost for Culture and Extension of the University of São Paulo (Universidade de São Paulo, USP). It was created in January 2005 to host and integrate the Brasiliana collection, brought together over more than 80 years by bibliophile José Mindlin and his wife Guita. With an extensive set of books and manuscripts, the Brasiliana kept by Guita and José Mindlin is considered to be the most important private collection of its genre. There are about 32 thousand titles that correspond to approximately 60 thousand volumes.

In 2002, professor Istvan Jancsó, then director of the Institute of Brazilian Studies (Instituto de Estudos Brasileiros, IEB) of USP, devised, together with José Mindlin, the project for the construction of a modern building capable of hosting the two most important Brazilian collections of USP (the first one being IEB's own collection, founded in 1962 by historian Sérgio Buarque de Holanda; the second being Guita and José Mindlin's).

Part of the works donated to the library belonged to bibliophile and librarian Rubens Borba de Moraes, who José Mindlin saw as "a kind of older brother" who had a "love for books and reading much like my own". An important intellectual and the most prominent researcher of the Brazilian bibliography, Rubens Borba de Moraes left his own collection of about 2300 works to the Mindlin couple after his death, in 1986. 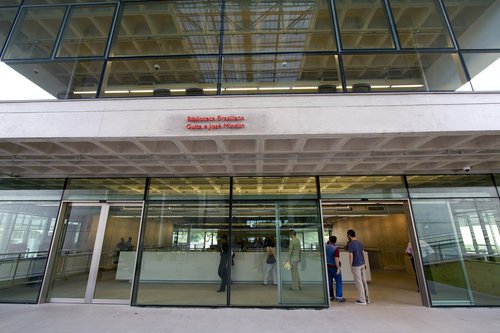 An extraordinary collection about Brazil: The library created by José Mindlin over the course of his life was organized in four main thematic sections: Brazilian affairs, literature in general, art books, and books as works of art due to their typography, layout, illustrations, binding, etc. The collection donated to USP in 2006 gathers works about Brazil or that, written and/or published by Brazilians, are important to the understanding of the history and culture of the country. The collection consists of works of literature, history, travel reports, historical and literary manuscripts, newspapers, maps, scientific books, textbooks, iconography, and artist's books. The Guita and José Mindlin Brasiliana Library has the objective of expanding its collection - making it a living library, as was the intention of José Mindlin - acquiring new titles and other collections that align with the project's guidelines.

This library, as stated in its regiment, has the compromise of conserving, disseminating, and facilitating the access of students, researchers, and the general public to its collections. It also aims to foster the growth of Brazilian studies through programs and specific projects. In this sense, the library has acted as a multi-disciplinary center of documentation, scientific research, and dissemination of Brazilian studies, book culture, technology, and digital humanities, therefore becoming an organ of integration of diverse academic initiatives, of intersectoral and transdisciplinary interest.

In 2005, since opening to the public, the library has brought together specialists, hosted projects and supported study initiatives, developing activities around four fields of knowledge: 1) Brazilian studies; 2) Book and reading history; 3)Technology of knowledge and digital humanities; and 4) Preservation and restoration of the books and papers.

José Mindlin (1914-2010): Born in the city of São Paulo on September 8, 1914, José Ephim Mindlin worked as a journalist for the newspaper O Estado de S. Paulo since he was 15, until he graduated from law school at the University of São Paulo, in 1936. He practiced law for 20 years. In 1950 he was one of the founders of the Metal Leve company, which became one of the biggest companies in the automotive parts sector. As an industrialist, he fostered the technological development and exportation of Brazilian manufactured products. He was made Doctor Honoris Causa by many universities, including USP. José Mindlin was a member of the Superior Council of the São Paulo Research Foundation (Fundação de Amparo à Pesquisa do Estado de São Paulo, FAPESP) from 1973 to 1974; from 1975 to 1976, he became the director of the Council of Technology of the Federation of Industries of the State of São Paulo (Federação das Indústrias do Estado de São Paulo, FIESP) and the Secretary of Culture, Science and Technology of the State of São Paulo, and structured his career as a researcher in this period as well. He was also a member of many councils of cultural entities, such as the National Historic and Artistic Heritage Institute (Instituto do Patrimônio Histórico e Artístico Nacional, IPHAN), the Brazilian National Council for Scientific and Technological Development (Conselho Nacional de Desenvolvimento Científico e Tecnológico, CNPq) and the USP University Press (Editora da Universidade de São Paulo, EDUSP). Jose Mindlin became a member of the Academia Paulista de Letras and, in 2006, was granted a chair in the Brazilian Academy of Letters.

Guita Mindlin (1916-2006): Born in São Paulo in 1916, she graduated from law school in 1940, but never practiced. Guita Kauffmann was 20 when she joined the Faculty of Law of the University of São Paulo. There she met the student José Mindlin, and two years later, they got married. Interested in history and literature, she did extension courses in the 60s and 70s. A great reader, she always looked after the books of the library, and across the years, studied how to conserve them. Guita visited libraries, attended courses in Brazil, France, Spain, and Germany, and set up a laboratory inside her home to take better care of the books of the couple's library. In 1988, together with Thereza Brandão Teixeira, she created the Brazilian Association of Bookbinding and Restoration (Associação Brasileira de Encadernação e Restauro, ABER), with the objective of gathering professionals tied to the conservation and restoration of books, printed documents, manuscripts, and artisanal bookbinding, thus stimulating national interest for graphic documentation. 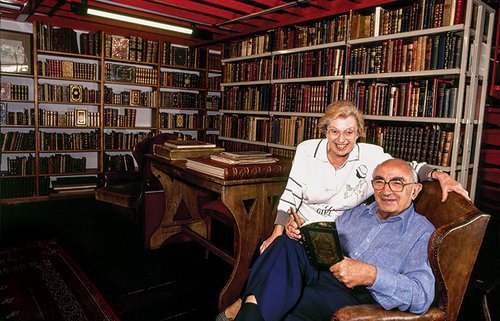 The Guita and José Mindlin Brasiliana Library is located in the Brasiliana USP Space, together with the Institute of Brazilian Studies (Instituto de Estudos Brasileiros, IEB), the Edusp Bookstore and the István Jancsó Auditorium. The architectural project was developed by the offices of Eduardo de Almeida and Rodrigo Mindlin Loeb, with the assistance of the Faculty of Architecture and Urbanism of USP. The building was inspired by other prestigious libraries around the world such as the Beinecke Rare Book & Manuscript Library of the University of Yale, in the United States, and the Sainte-Geneviève, in Paris, France. The Library of Congress of Washington was consulted to make the guidelines for the conservation of the works.

BBM's collection is housed in three mezzanines that can be seen from the library's atrium. A technical reserve with the capacity for about 90 thousand bibliographical, periodical and archival items was designed to accommodate the expansion of the library's collection. Two laboratories, of preventive conservation and of digitalization, are in charge of the preservation and virtual dissemination of the works of the library. Inside the BBM's structure, there are also two study rooms - one of them at ground level, open to the general public, and another one on the first floor for consulting the items in the library - and two display rooms. For the production and dissemination of research of Brazilian affairs, the building is equipped with a room for the offices of associate researchers and residents, and another room for academic events, that can also be used for musical performances.

The building's structure prioritizes natural light sources over artificial ones, and there are also photoelectric cells installed to capture solar power, one of the best ways of producing clean energy.

In addition to the budgetary resources from the University of São Paulo, the other instances that helped fund the construction were the Ministry of Culture, the Lampadia Foundation, the Cultural Action Program (Programa de Ação Cultural, ProAc) of the Secretariat of Culture of the State of São Paulo, Senator Eduardo M. Suplicy, BNDES, Petrobras (sponsored through the Rouanet law), CBMM, CSN, Telefônica Foundation, Suzano Papel e Celulose, Votorantim Foundation, Santander Group, Natura, CPFL, Cosan, and Raizen. The management of the construction was the responsibility of the Foundation for the Support of the University of São Paulo (Fundação de Apoio à Universidade de São Paulo, FUSP), in partnership with the Physical Space Superintendence (Superintendência do Espaço Físico, SEF) of USP. 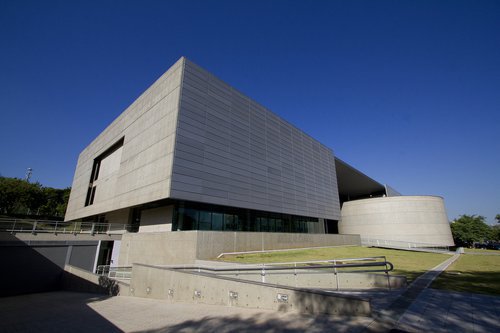